Back to Acids and Bases

Regardless of which units are used, the concentration of any solute can be increased simply by adding more solute. The concentration of a solute can be decreased by adding more solvent to dilute the original solution. For example, a chemist has 1 liter of a 100g/liter solution but requires a 50g/liter solution. They can simply add an additional liter of solvent to the original solution and prepare 2 liters of the required 50g/liter concentration.

A dilution like the one described above is not possible if the desired concentration is significantly more dilute than the original solution. For example, if the chemist above requires a 0.01g/liter solution, they would need to add an additional 9,999 liters of solvent to the original liter of solution to dilute it to a 0.01g/liter concentration. Alternatively, they could add 0.1ml of the original 100g/liter solution to 1 liter of solvent. Clearly, neither method is very convenient since the chemist must either add a very large volume of solvent or measure a very small volume of the original solution. A dilution technique, called serial dilution, must be used in which a series of dilutions is used to prepare progressively lower concentrations of solution until the desired concentration is reached. The following diagram illustrates the example. 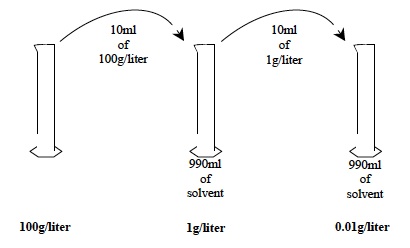 Acids are a group of covalent compounds that, when in solution in water, dissociate into one or more hydrogen ions (H+), and a negatively charged ion. Consider the example of hydrochloric acid, HCl, the acid that aids digestion in the stomach. When HCl is dissolved in water, it dissociates into the cation H+ and the anion Cl–according to the following equation:

Bases are ionic compounds that, like acids, also dissociate when dissolved in water. Consider the example of sodium hydroxide, NaOH, the base found in drain cleaner. When NaOH is dissolved in water, it dissociates into the hydroxide anion, OH–, and the cation Na+ according to the following equation:

Note: Alcohols such as rubbing alcohol also contain OH groups. However, alcohols are not bases since they are covalent, organic compounds and not ionic compounds like bases.

Notice that the dissociation reaction of bases does not directly involve hydrogen ions. However, when both a base and an acid are dissolved in water, a neutralization reaction takes place that reduces the hydrogen ion concentration. In water solution, both a base and an acid will dissociate as shown in the previous two equations. When this occurs, the OH– and H+ ions react to form water, H2O, according to the following equation:

Notice that the net result of a neutralization reaction is the production of a water molecule(s), the production of a salt, and a decrease in the hydrogen ion concentration. The reactivity of bases is due to the fact that the hydroxide ion, OH–, is very reactive and reacts readily with H+ ions.

In this Core Experience Learning Lab, concentrations will include only powers of 10.

Water is considered both an acid and a base since it can produce both hydrogen ions (H+) and hydroxide ions (OH–) in low concentrations according to the following equation:

Figure 2: Relationship of the hydrogen ion concentration (moles per liter) and the pH Scale.

Almost everyone has experienced sore stomach pain. Among the most common cause of stomach pain is excess acid in the stomach. As a component of the digestive process, the stomach secrets hydrochloric acid (HCl). This acid helps digest food. However, sometimes the stomach overproduces HCl, which can cause irritation and pain. Antacids are medications taken orally that react with excess stomach acid and “neutralize” it. This often relieves the symptoms of acid stomach.

While there are many different antacids that differ in color, taste, and form (liquids, gums, tablets, etc.), many contain one or more bases such as Al(OH)3  (aluminum hydroxide) or Mg(OH)2 (magnesium hydroxide). When such hydroxide bases react with excess HCl (hydrochloric acid) in the stomach, the following reaction occurs (magnesium hydroxide is used in this example): This reaction “neutralizes” the excess stomach HCl. The reaction results in the formation of the harmless salt, magnesium chloride (MgCl2), and water.

In nature, there are many examples of how repeating changes in structural characteristics are often related to logarithms. The nautilus shell, for example, increases in size by increasing the volume of the compartments as the animal grows. This increase occurs in a logarithmic fashion. Notice the inner compartments don’t simply double during growth, they increase in size much more rapidly.

Another very beautiful example of logarithms in nature is the arrangement and growth of seeds in the sunflower and other flowers. A quick glance at the sunflower clearly shows the organization of its structure and seed placement in a highly organized, logarithmic manner.

One of the most important things to realize about natural logarithms is that they do not increase linearly (such as 500 + 500 + 500 + 500 = 2,000), but rather “logarithmically” (10 x 10 x 10 x 10 = 10,000). Thus, in the pH scale that we will be using throughout this CELL and chemists use every day, an increase in pH of 2 gives us a [H+] (hydrogen ion concentration) ten-times higher than a pH of 1. The difference between a linear and logarithmic scale (on the vertical, y-axis) is shown below. The highest number plotted on each of these graphs is 4,250. Notice how, on the logarithmic scale, the data is plotted in a straight line. The most important thing for us to remember for this CELL is that a change in pH from 1 to 2, for example, doesn’t mean that the acidity doubles, but actually increases ten-fold. Thus, if we lowered the pH from 7 to 4, we would have changed the acidity of the solution a thousand-fold!

The Focus Questions in each Investigation are designed to help teachers and students focus on the important concepts. By the end of the CELL, you should be able to answer the following questions: