Note: The procedural steps are listed below for your reference. 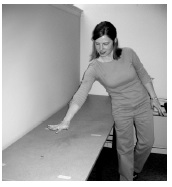 After you have completed the game, consider the following questions.

Note: Velocity involves both the speed at which an object moves and the direction in which an object moves. Acceleration is the rate of change in velocity. Therefore, a change in speed or direction affects acceleration. If an object remains at a constant speed in a constant direction, velocity does not change and therefore the object has no acceleration. A person running in a straight line who then turns to the left, changes velocity, even if the person continues at the same speed. Due to the change in velocity, the person’s acceleration also changes. This may be a new definition of acceleration for you to think about. However, if you know that acceleration results from a change in speed or direction, you will have sufficient knowledge to perform the activities in this CELL.

Newton’s First Law of Motion states that an object in a state of uniform motion stays in that state unless acted upon by an outside force.

You now continue the Investigation by experimenting with frictional force.

Discuss the movement of the large woodblock.

In the next activity, you will measure frictional force. Use the starting and finishing lines on the table.

Note: The student pulling must keep a constant velocity. If the student completed the trial in six or fewer seconds, he or she will try again, this time a little slower.

Note: Perform several practice trials until the student can pull the woodblock 80 cm in 8 sec.

Be sure to clean up your bench with your group after finishing your experiments.